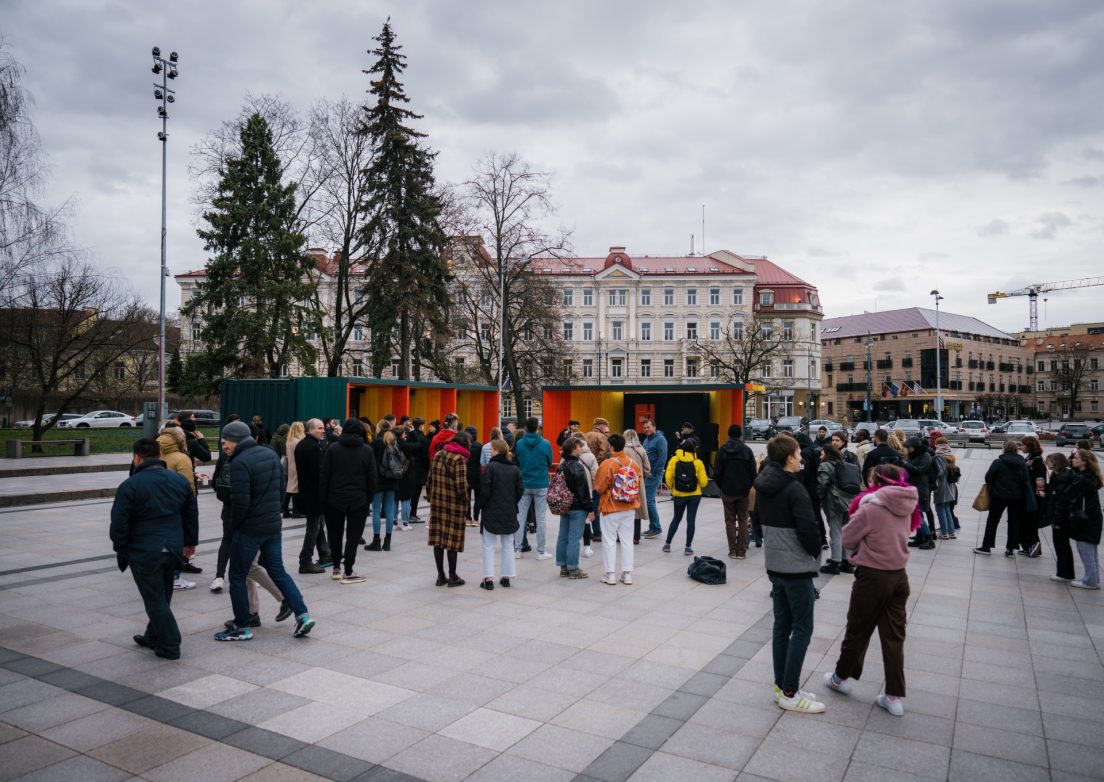 The fourth and final part of its journey in the capital Vilnius started on Thursday with “Artscape’s” audiovisual installation “When Stories Meet”. The opening celebration on 21 April at the Cathedral Square shared memories of the creative process and the experience gained during the journey in Lithuania. The installation will be open to Vilnius residents and visitors until 1 May.

On Thursday evening, the installation space created by Jonas Tertelis and Dominas Pulokas invited visitors to meet the creative team and the characters of the film shown in the installation. Jonas Tertelis, the film’s director, introduced his work by saying that a passer-by meeting a foreigner speaking on screen would be surprised to realize that his and that person’s stories are not in any way different – we all care about similar things and are inspired by similar values. The director shared that the most important thing in creating the installation was not to portray the characters of the stories in one way or another, but to create a chamber space where the visitor would feel that he or she has met the hero of the story face to face. 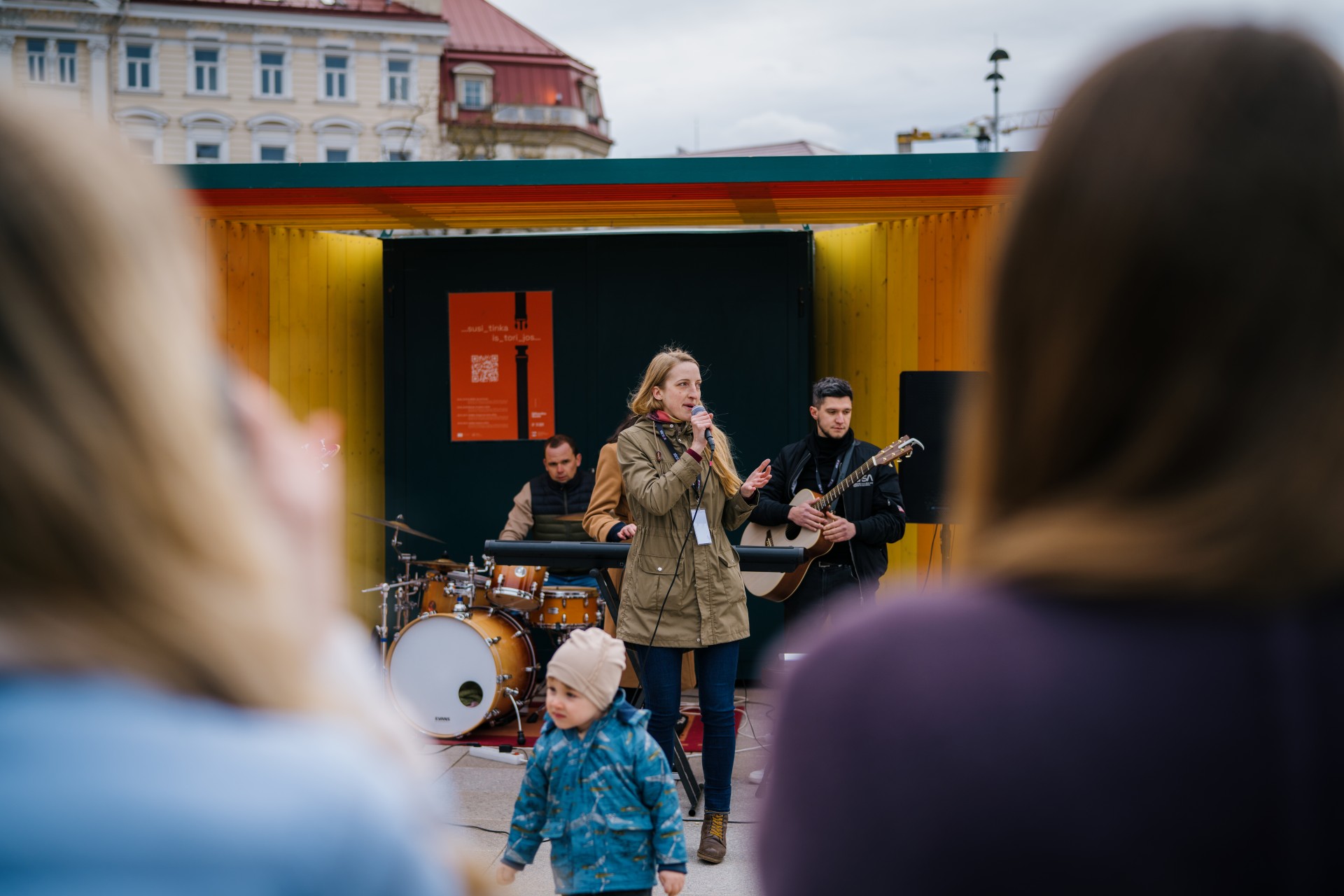 Representatives of “Artscape”, the arts agency that is organizing the project with partners Diversity Development Group, NARA and Lithuanian shorts agency Lithuanian Shorts, revealed that the project is dedicated to the promotion of tolerance in Lithuania – but said, while the word “tolerance” is associated with acceptance of what is unacceptable or unfamiliar, in the context of migration, the organization suggests that it should be understood as an openness to an inevitably changing world, to new opportunities to encounter unfamiliar cultures and to meet the people who bring their worlds to Lithuania.

The war in Ukraine and the arrival of Ukrainians in Lithuania have allowed us to see the migrant in a different light: to get closer to the reasons for migration with our minds, to know the experiences of the other person with our feelings. This close encounter with our neighbours fleeing hardship opens up new dimensions in our knowledge: the civil war in Syria or the unrelenting humanitarian crisis in the Democratic Republic of the Congo, which have hitherto received scant media attention, can now be seen through the prism of the war that has been waged on the continent of Europe. As we understand the inevitability of the exodus from Ukraine, we can also better understand the stories of people who have come from outside Europe. 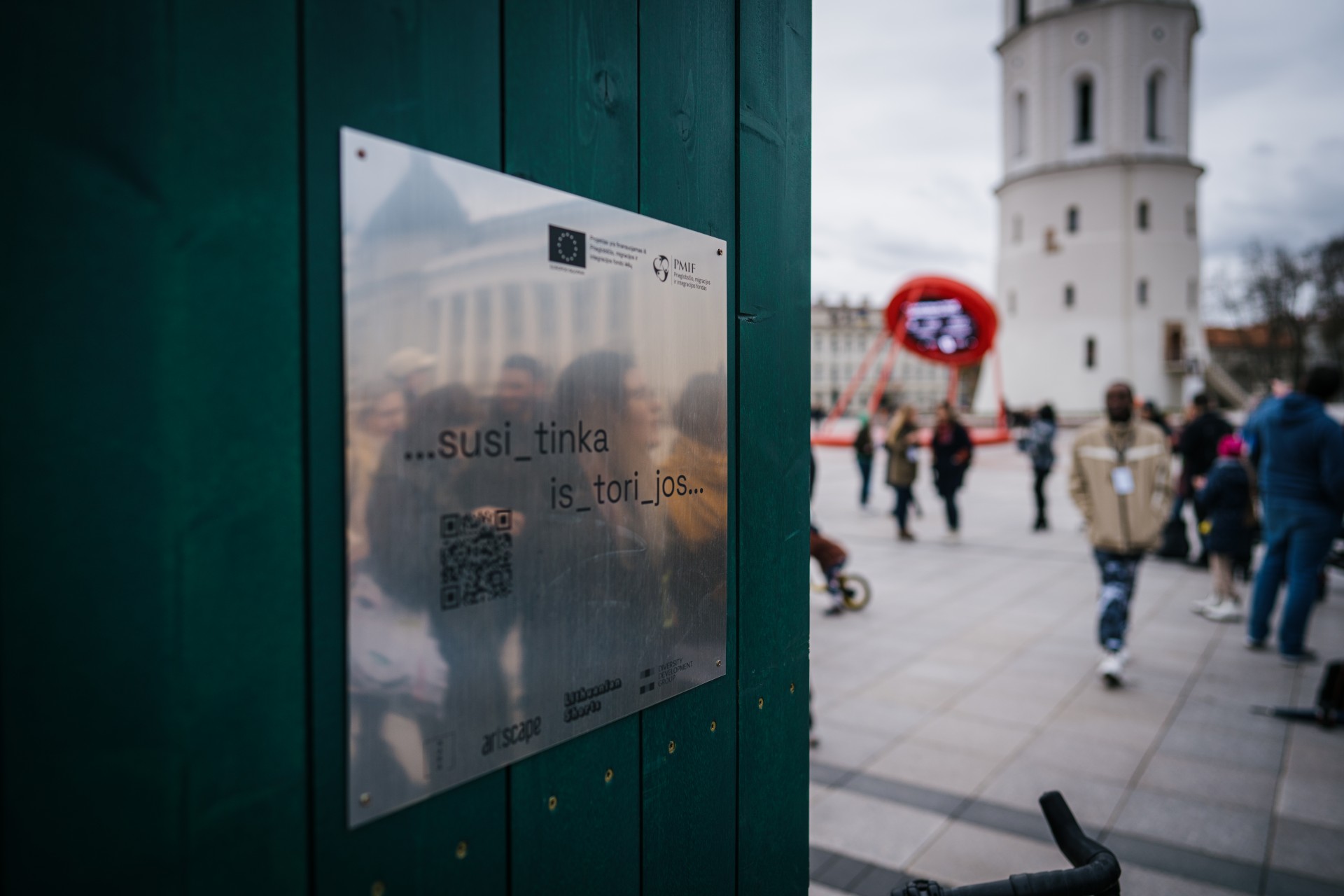 During the opening of the audiovisual installation in Cathedral Square, the “glokali” music group “Uphill 7” played. The multicultural band from Pabradė, consisting of lithuanians, an afghan and a sri lankan, together with “Artscape” and producer Gajum Jogaila Milkeritis, recorded the single “Freedom” at the beginning of the year, which tells the story of freedom from different perspectives. On Thursday, the band played live in Cathedral Square and dedicated the song to the Ukrainian people whose freedom is being curtailed by the war, which is now in its second month.

The installation, now visiting Lithuania’s fourth major city, invites to hear and share stories through its content and accompanying activities. The audiovisual part of the installation consists of eight stories of people who have come to Lithuania from different parts of the world, from different cultures, and who talk about different aspects of their lives – family, home, profession, and hobbies. The stories of the installation’s protagonists allow the visitor to get acquainted with the most diverse portraits of society, people and life: the portrait of a refugee in Lithuania, communication through listening, discovering new things in a different country, world music, cultures, and, of course, delicious food. 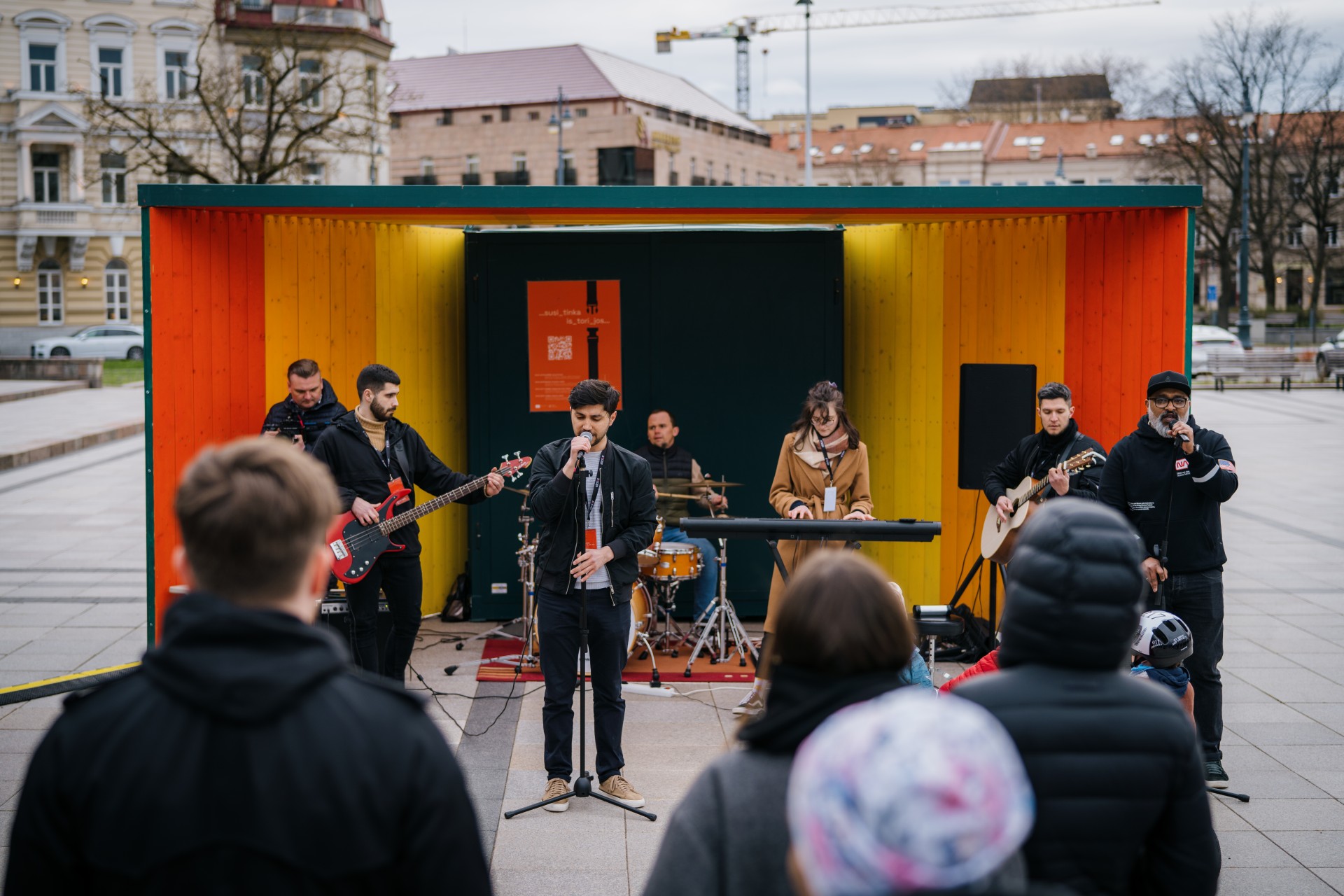 The installation in Lithuania was also accompanied by conversations and discussions with representatives of various fields, who shared their professional experiences and personal insights on the topic of migration, which is a widespread and relevant topic in the cultural, social, professional and personal lives of society. A conversation with Doctors Without Borders, an international independent humanitarian medical aid NGO in Klaipėda, explored the challenges and successes of the organization in dealing with the unexpected migration situation in Lithuania. During the conversation in Šiauliai, Renata Kuleš, the representative of the United Nations Refugee Agency (UNHCR) in Lithuania, answered questions about the migration contexts in the world and in Lithuania, and the challenges that unexpected and unforeseen migration poses to states and societies.

On 30 April at 19:00, Yusufi Muhammadzoda, Head of the Lithuanian Refugee Council, will share his insights on the work of the Refugee Council and his perspectives on the migration and migrant situation in Lithuania. After the talk, participants will have the opportunity to see the short film program “When Stories Meet IV”, prepared by Lithuanian Shorts, which will present the challenges of arriving and starting a new life in a foreign country from different perspectives. 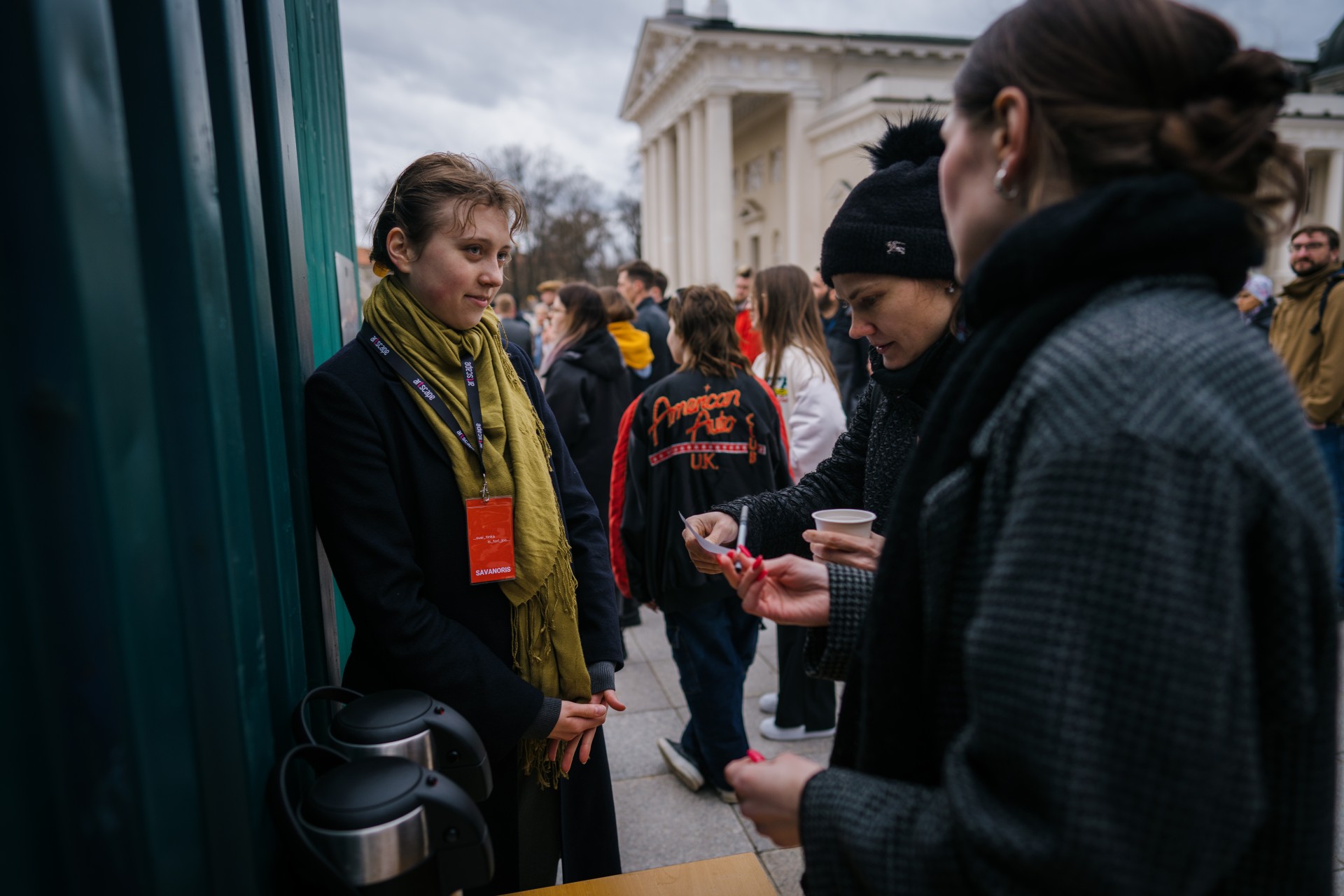